Written by Locus Energy
Updated over a week ago

Locus Energy’s Virtual Irradiance (VI) Performance Waterfall is a tool that analyzes power generation data from a meter to determine whether the panel(s) and inverter(s) behind the meter are working as expected.

The VI Performance Waterfall first calibrates a PV model based on measured energy data from the site, to create an accurate as-built estimation. Leveraging VI as the source of irradiance, the Performance Waterfall then analyzes the differences between the modeled and measured data series to estimate the following kWh losses on a daily basis:

These loss buckets are available in the charting tool, reporting interface, and our external API with daily or higher granularity

Requirements for the VI Waterfall

In order for the VI Performance Waterfall to run, the meter needs to meet the following requirements:

The waterfall analysis may take up to 4 weeks to update.  This process runs on a 3-4 week cycle across the entire Locus fleet, so the results for a supported site may lag behind the current date by up to 3-4 weeks.

Note: If a site’s location is updated or the site uploads historical data, the waterfall can also take up to 4 weeks to account for the new information.

Downtime losses are attributed to times when the system is not producing, but the model predicts an output based on incoming irradiance, and there is not significant snow.

Partial capacity losses identify events such as string outage losses, or when a single inverter goes down on a site with multiple inverters. These losses occur when the system is still producing, but at a reduced capacity. Based on the productivity of the site, the Waterfall identifies step-function losses in site capacity and estimates the associated lost energy.

These losses are attributed to the loss of production due to snow on the arrays. These losses are distinguished from downtime when snow is present and the system is not producing. 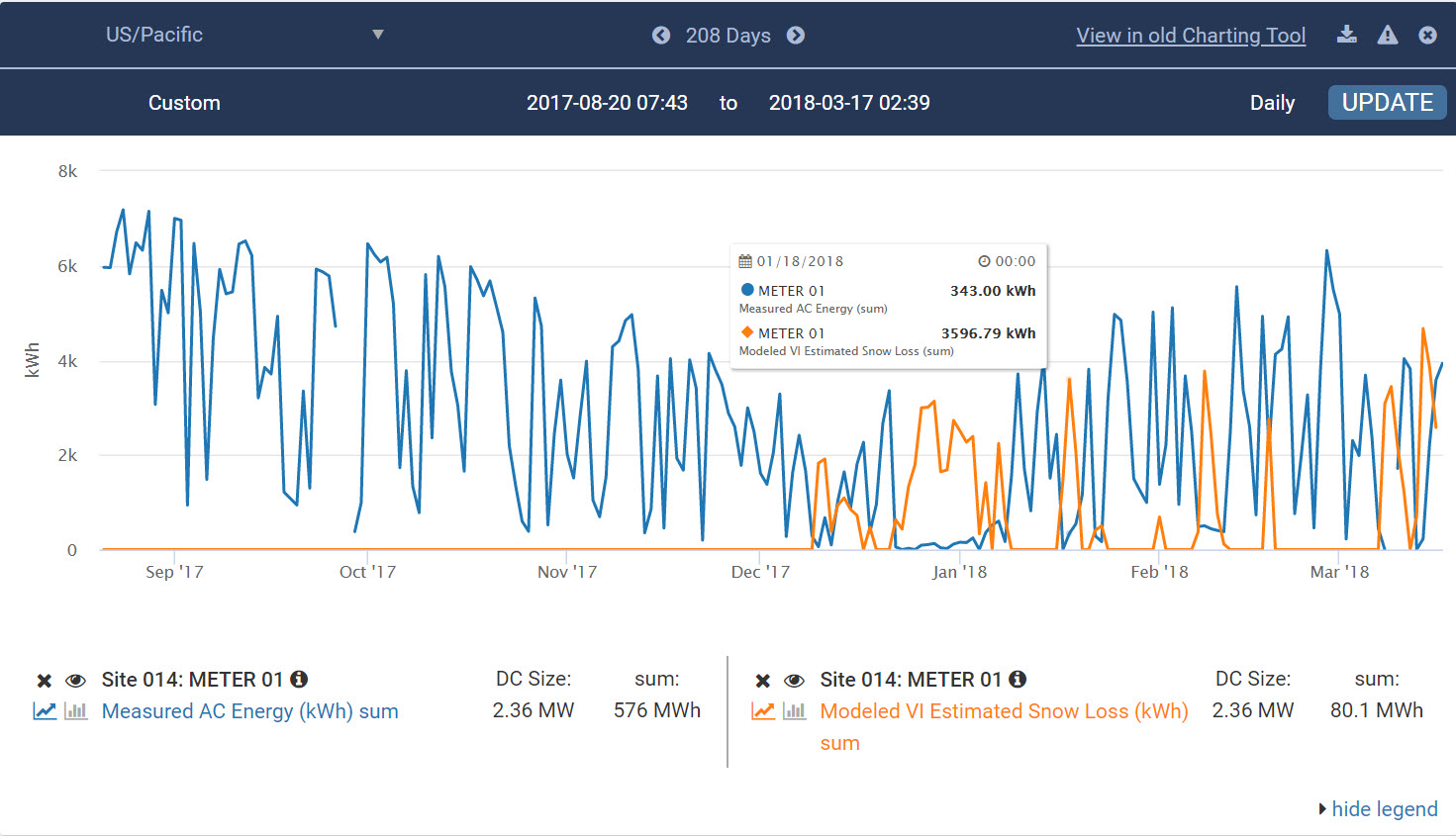 This bucket captures losses as a result of dirt, dust, and other environmental particles accumulating on the arrays.  Losses of this type are reversible and tend to accumulate slowly. Using changes in the site's productivity and rainfall data, the Waterfall estimates the amount of energy lost to the array being dirty. 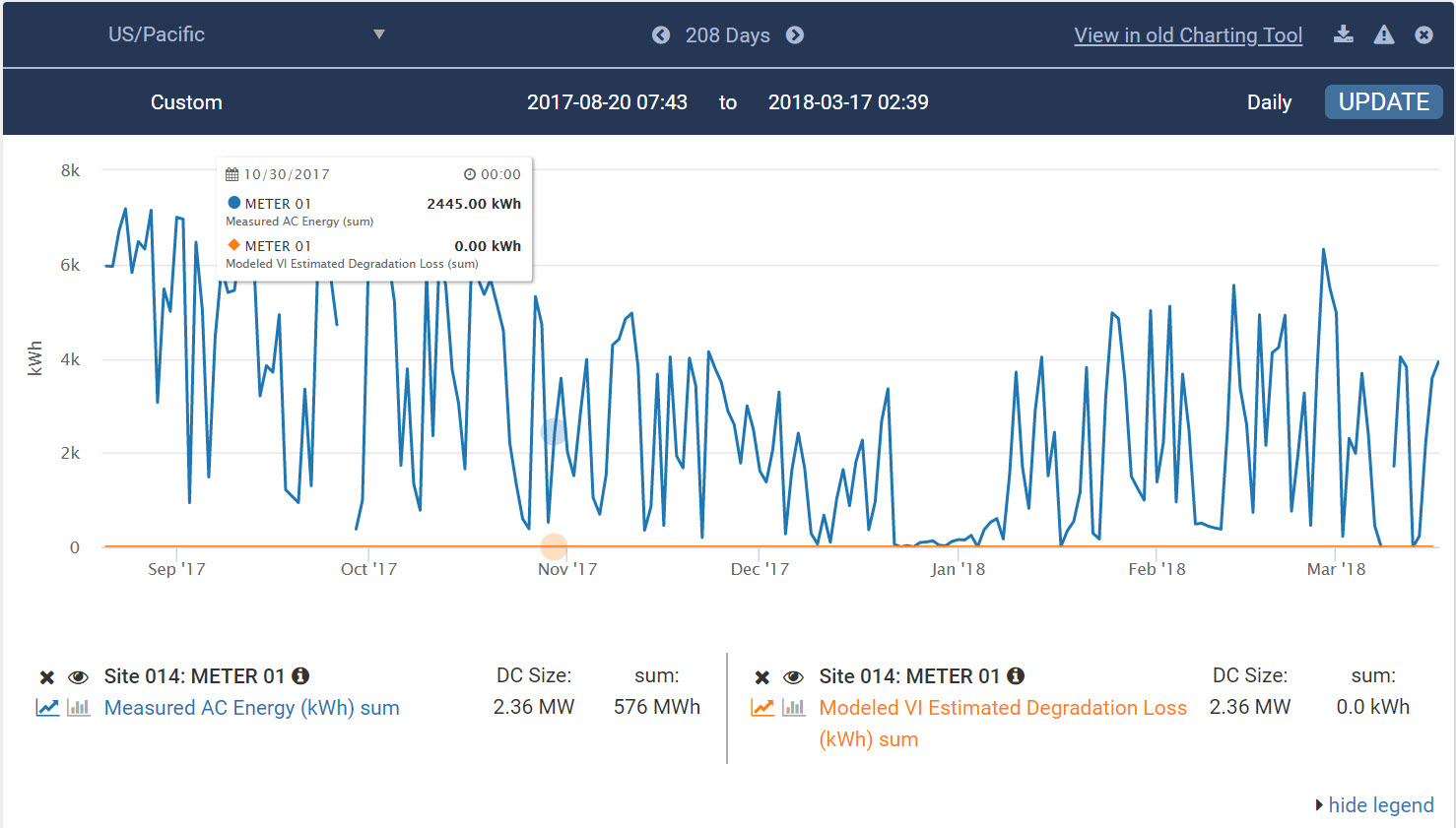 When the differences between measured and modeled energy cannot be completely accounted for by the existing buckets, the remaining losses are labeled “other.” These losses can be attributed to data collections issues (data spikes, comms loss, etc) and small modeling inaccuracies.

When the VI Waterfall is enabled, if a site has results available, the following data fields will populate in dataavailable:

All of the above fields will be available at daily, monthly and yearly granularities.  These data fields will populate in the charting and reporting tools as available data and will also be available in the Locus External API.

Q: How do I gain access to the VI waterfall?
A: Contact your Locus Sales Rep in order to make sure your account has VI enabled and that your sites qualify for the waterfall analysis.

Q: Why is my site not showing degradation losses?
A: Degradation requires two years of clean data to populate.

Q: How can some losses be negative?
A: The "Other" and "Degradation" buckets can both be negative.
If the waterfall over-assigns losses to the named buckets, the “Other” bucket can be negative to correct for the difference between measured and modeled energy.
The Performance Waterfall assumes a loss of 0.5% a year and displays losses in the Degradation bucket when the system deviates from this assumption. Degradation losses will be negative if the system degrades slower than 0.5% a year.

Did this answer your question?